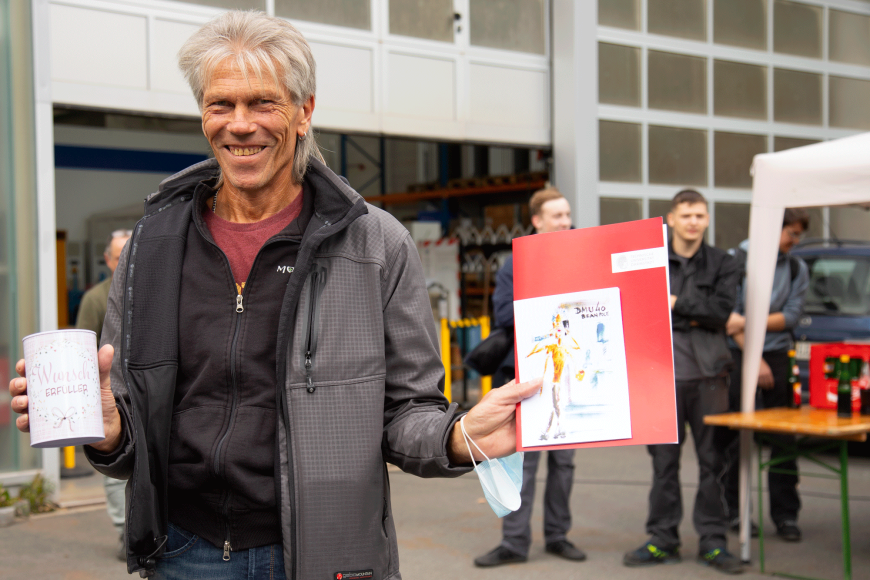 Hello Atze, congratulations on your anniversary!

I went to vocational school for electrician, but at some point the subject became too one-sided for me. Metal mechanic, that was the new goal for me. I started here as an apprentice on 1.9.1981, I even had the choice between PtU/PTW and steel construction. But everything was completely new here, a new hall, modern machinery, and we were always given the most modern equipment. That convinced me.

40 years is a long time. Were things different back then?

Yes, of course, 3 times the size of the team back then, fewer specialists, i.e. everyone had to take care of everything.

I started with an apprentice's salary of 181 DM per month, for comparison: my moped was 300 DM back then, almost new, 3 days open air concert at the Nürburgring with Metallica among others was 60 DM.

What has changed in terms of work: nowadays our activities are better divided, meanwhile each employee has his own field. There is still a lot of exchange.

You were trained as a mechanical engineer at the Lichtwiese?

That's right! 3.5 years of training. Then I helped to design, develop and build my own HSC milling machines. Until about 1995.

But that didn't fulfill you anymore?

Yes, something like that, anyway, I was looking for a new challenge. I have then attended several CNC courses and was then mainly involved in milling.

Today the working day is already nicely structured. You learn something new every day and can also contribute your own ideas. It's not as sterile and rigid as in industry, which is what I hear from colleagues. But you're also expected to put yourself out there as a whole person.

What's the most difficult part you've ever milled?

That was probably the huge swing arms for our 3D servo press, gigantic parts with extreme demands on accuracy and surface quality, all milled from a single giant block of steel. I still dream about that sometimes. (Laughter)

You've seen a lot in 40 years. What was the most drastic change?

The advent of CAD/CAM, the digitalization of machines in general.

Atze, thank you very much for the nice conversation and all the best for the future.

(The interview was conducted by E. Henkes)