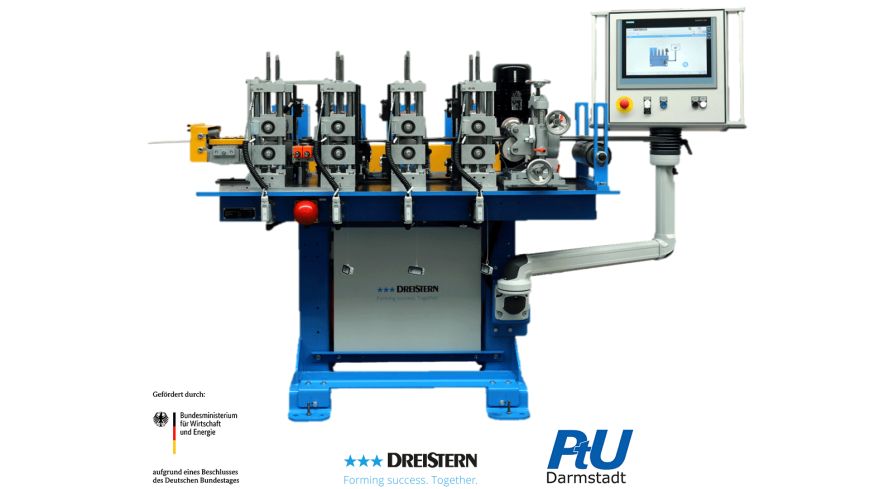 Within the scope of the project “Intelligent Profiling Processes by Monitoring Drive Torques”, which is funded by the AiF-ZIM, an “intelligent” profiling system of the company DREISTERN GmbH & Co. KG from Schopfheim arrived at the TU Darmstadt at the end of the first project year.

Roll forming is an industrially established manufacturing process for continuous forming of open and closed profiles. Characteristic features are the roller tools rotating in pairs, which are responsible in successive roll forming stands for both profile transport and incremental forming. The resulting interactions within the profiling line are often the cause of lengthy tool adjustments and low process efficiencies. With the intelligent project system, relevant process data is to be recorded in order to be able to develop and initiate targeted measures for process optimization.

After joint qualification of suitable sensor components, the roll forming line was set up at Dreistern GmbH Co KG in Schopfheim and the numerical simulation model of the process to be investigated in Darmstadt in order to be able to investigate and increase the energy efficiency of roll forming both in the preliminary design on the computer and in the real process. For use in the research environment, the mobile roll forming line was equipped with an individual substructure, whereas the mechanical and electrical part of the roll forming machine consists without exception of industrial plant components. The digital part, which makes the profiling machine intelligent and thus accessible for a wide range of industrial 4.0 applications, is based on three characteristic process variables. For force and position measurement at the upper tool shafts Dreistern has developed a smart integration into the roll forming stands and implemented it directly into the system control. Torque measurement is performed wirelessly via sensor-equipped cardan shafts in the drive train, which were developed by core sensing GmbH and also integrated into the control system by Dreistern. The joint acquisition of these three measured variables makes it possible to record process changes inline and to identify correlations between the measured data and the process states in the data analysis.

For the second year of the project it is planned to generate a comprehensive database with the new system and to investigate suitable measures for increasing energy efficiency in roll forming in both the virtual and real process environment.

The PtU would like to take this opportunity to thank the Federal Ministry of Economics and Energy (BMWI) for funding. Special thanks also go to the project partner Dreistern GmbH & Co. KG for the cooperation so far and for providing the roll forming line.